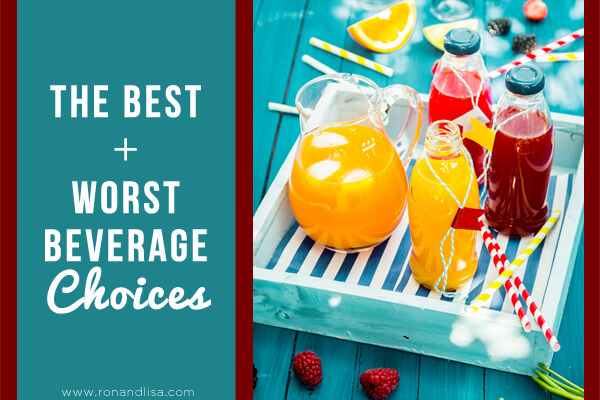 Water is the essence of life – in fact – water makes up approximately 60 percent of our body weight. One of the most important functions of water in your body is to flush out toxins and salt. Did you know eight glasses of purified water a day will aid your body’s ability to properly digest, transport nutrients, remove toxins and waste, lubricate joints, improve overall immune function, maintain efficient digestive function & elimination, and maintain optimal and stable heating & cooling of the entire body? The body can live without food for weeks, but cannot be without water for more than a few days.

Chances are by now that you’re well aware that most sodas and flavored waters have artificial additives, but how bad are these for your health?

Many soft drinks contain phosphoric acid, which leeches minerals such as calcium and magnesium out of your bones. Sodium benzoate, a common preservative, causes DNA damage and can eventually lead to cirrhosis of the liver and Parkinson’s disease. Artificial colorings and benzene are two known carcinogens that get added to the mix. Finally, sugar, which science has shown to be just as (if not more) addictive than cocaine, is utterly jam packed in soda bottles. A 20-ounce bottle of Coca-Cola has 65 grams of sugar; equal to nearly 17 teaspoons of sugar.

Glaceau’s VitaminWater, which comes in an array of colors and flavors, has carcinogenic colorings and flavorings like those mentioned above, plus an impressive 33 grams of sugar per 20-ounce bottle of water. Why not just eat a candy bar? Crystalline fructose – the third ingredient listed – is more damaging than high fructose corn syrup (HFCS). Why? First, it may be contaminated with arsenic and heavy metals. Second, the way crystalline fructose metabolizes in your body: instead of turning into glucose, crystalline fructose turns into triglycerides and fat, increasing your chance of heart disease.

Kraft’s new colorful MiO squirt bottles are full of food dyes that are known carcinogens. But, did you know that colorings can also cause allergic reactions, decreased IQ, and hyperactivity? In addition, the third ingredient listed – propylene glycol – is a solvent that can potentially result in cell mutations and organ damage (including the skin). Think you’re saving on sugar with MiO? Read on about the dangers of sucralose (Splenda) in the diet soda section below.

Are Diet Drinks the Answer?

Diet sodas contain artificial sweeteners that offer no benefit to the body and may actually cause health issues. These artificial sweeteners include aspartame (NutraSweet), sucralose (Splenda), acesulfame, potassium, saccharine, and high fructose corn syrup. Aspartame is also found in both diet food and sodas. Acesulfame-K is a newer sweetener, which can be found in soft drinks and some baked goods. The sweetening agent in Sweet’N Low is saccharin, which has been linked to bladder cancer. One of Splenda’s (sucralose) ingredients is a form of chlorine called chlorocarbon – think of the kind of chlorine that’s in your swimming pool. Equal (aspartame) is the #1 complaint registered by consumers at the Food and Drug Administration (FDA) with a growing list of over 92 side effects. Aspartame is also an excitotoxin, which unnaturally excites brain cells to death (refer to Dr. Russell Blaylock’s book, Excitotoxins) causing changes in behavior and brain function, and has been associated with Alzheimer’s disease, migraines, seizures, weight gain, and respiratory difficulties. Although these artificial sweeteners are marketed as safe for diabetics, ironically, they can be quite detrimental to ones health. Because artificial sweeteners are concentrated in terms of sweetness, manufacturers are forced to add fillers so that when you shake the package it has the same physical weight and feel as the old, familiar packets of Sweet’N’Low. Fillers are typically dextrose: a highly processed form of GMO corn sugar that is precisely what diabetics – and everyone in general – should avoid. According to Dr. Joseph Mercola, artificial sweeteners can lead to impaired kidney function, depression, headaches, infertility, brain tumors, and a long list of other serious health problems. These are three chemicals are addictive and offer absolutely no health benefit to the body and over time will potentially lead to health problems. Furthermore, a January 27, 2012 study in the Journal of General Internal Medicine found that people who drank diet soda daily were 43 percent more likely to suffer from strokes, heart attacks, and other heart-related death. Chlorocarbons are not compatible with the human metabolism. They are known to cause genetic and reproductive damage.

If you’re watching your waistline and looking for a low calorie drink, drink, choose a natural one such as Blue Sky Lite (made with real sugar) or Zevia Natural Soda sweetened with stevia. Sparkling juices like IZZE and organic teas are a healthy alternative to diet sodas, providing a low- calorie refreshing source for the body.

Stevia has been used as a sweetener for centuries in Paraguay, and agave has been used in Mexico for centuries. Stevia and agave nectar are plant derived sweeteners and do not contain any artificial or harmful chemicals. Stevia and agave nectar are absorbed slowly into the blood stream so they won’t cause a spike in blood sugar or insulin levels, making them ideal for diabetics or for anyone trying to control their weight. However, Stevia, a plant that looks similar to sage, is many times sweeter than sugar and a little goes a long way. It’s best to consume the green powdered variety found in independent health food stores, as it has been processed less than the powdered white variety.

What About Energy Drinks?

Drinking 1 cup of tea per day can provide your body with many health benefits and provide a natural caffeine boost without all the added sugar and artificial sweeteners found in many energy drinks. Tea is one of the fourteen so-called Super Foods. Drinking one cup a day can help prevent cancer and osteoporosis. Tea also has natural anti-viral and anti-inflammatory properties.

Many energy drinks contain caffeine from concentrated plant extracts or synthetic caffeine as opposed to a naturally occurring source. For example, Red Bull is more expensive than other, more natural sources of caffeine.

Steaz Energy drink is Fair Trade certified, guaranteeing the farmers receive fair wages and safe working conditions. Steaz Energy drink uses organic ingredients, meaning they’re grown without the use of pesticides, herbicides, fungicides, and fertilizers. They use caffeine that is naturally occurring in plants, rather than synthetic caffeine produced in a lab.

Want to Reduce Your Soda Intake?

Try sparkling water, club soda, or seltzer. These will provide the same satisfaction as a carbonated beverage without the artificial ingredients and sugar.

The makers of SodaStream offer convenient, environmental friendly and easy way for people to create sparkling water and/or flavored natural sodas right from their own home. Say goodbye to heavy soda or water bottles to carry, store at home or dispose of! Each carbonator makes the equivalent of either 170 or 310 aluminum cans worth of beverages; depending on size.  When empty, the carbonator can be refilled at local retailers or online.

Filter Your Way to Health

Because SodaStream uses water straight from the tap or filter, we recommend using filtered water to remove biological and chemical contaminants. The SodaStream system makes traditional store-bought beverage bottles virtually obsolete. The habit of reducing purchases of bottled beverages will mean savings in your pocket, less plastic manufactured, less plastic waste created and fewer bottled beverages being transported from manufacturers to distributors to stores to homes. Save Money, Save Time. We suggest the SodaStream MyWater brand of flavors such as Lemon-Lime, Orange, Raspberry or Mint (Mojitos anyone?). They are unsweetened, all-natural flavor essences and used for making lightly flavored seltzer or sparkling water. We also recommend the Sparkling Naturals Line which includes all-natural ingredients for the creation of healthier sodas (ie: Cola, Green Tea, and Black Currant & Pear). Regardless of your flavor preference, all of the natural selections are free of artificial flavors, artificial colors and artificial sweeteners, and do not contain any preservatives.With the increase in hot summer temperatures approaching, it’s important to drink water for the aforementioned reasons. Additionally, when consuming alcohol, tea, coffee or other more-than-water beverages, it’s important to rehydrate to replenish lost water during the metabolism of these liquids. When consuming barbequed food, remember to drink water to quicken the transit time of carcinogenic compounds along the digestive tract to release them from your system. Here’s to happy – and healthy – hydration!

Lisa Beres is a healthy home expert who helps busy people create non-toxic homes with simple, step-by-step solutions to improve their health. A building biologist and award winning TV media expert, Lisa is the co-founder of The Healthy Home Dream Team, creator of Change Your Home. Change Your Health in 30 Days and co-author of Just Green It! Lisa’s TV appearances include “The Rachael Ray Show,” “Nightly News with Brian Williams,” and “TODAY.”

Sandra Keros, HHC AADP, is a board-certified holistic health counselor who overcame “incurable” fibromyalgia using integrative medicine and her own positive reinforcement body-mind technique. She is a sought-after inspirational writer and speaker focusing on the combination of wellness, overcoming life challenges, and celebration of the human spirit.