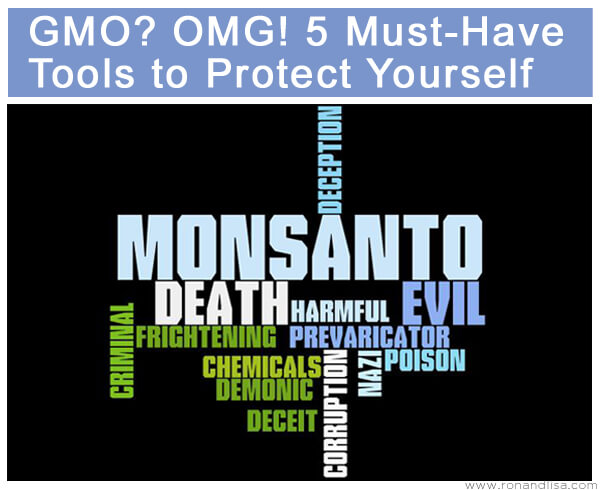 Often times, life really does imitate art.  We see played out repeatedly in movies, cartoons, comic books, novels and video games – opposing forces in the fight of good versus evil. Whatever the end goals of the evil forces are – be it control, money, greed or power – when it comes to our modern day food supply, we find a similar war against our freedom of food choices.

According to the Non GMO Project, ‘GMOs, or “genetically modified organisms,” are plants or animals that have been genetically engineered with DNA from bacteria, viruses or other plants and animals. These experimental combinations of genes from different species cannot occur in nature or in traditional crossbreeding.’ Genetically engineered (GE) foods, also known as genetically modified (GM) foods run rampant in our current day food supply.  Unfortunately, almost all GMOs are engineered to withstand direct application of herbicide and/or to produce an insecticide with no consumer benefit; quite the contrary. GMO’s have been linked to health problems, environmental damage and violation of farmers’ and consumers’ rights.

There has been no government health testing or long term studies of health effects from GM foods. In the U.S., the government has approved GMOs based on studies conducted by the same corporations that manufacture the seeds and profit from their sale. Say whaaat?  This begs the obvious question, if genetically engineered ingredients are safe, then why are these companies working tirelessly to keep them unlabeled; especially since most other countries don’t consider GMO’s to be safe? In over 60 countries around the world – including Australia, Japan, China, Russia, Saudi Arabia and all of the countries in the European Union – consumers have a right to know if their food contains GMOs (see the full list HERE). But, not in the U.S. Our country, built on freedom, independence and democracy has been left in the dark by companies seeking to maximize profits at our expense.

“There is a direct correlation between our genetically engineered food supply and the $2 trillion the U.S. spends annually on medical care, namely an epidemic of diet-related chronic diseases.” ~The Organic Consumers Association

Think you’re not being affected? Ha! Think again. According to the Non-GMO Project, GMOs are in as much as 80% of conventional processed food. High risk crops (those in commercial production) include:

But, these aren’t the only crops to be concerned about.  Animal products can have contamination from feed and other crops are affected by cross pollination (monitored risk). And, GMO crops find their way into common ingredients under many different guises.  For a full list, click HERE.

5 Tools to Protect Yourself Against the GMO-Tools:

1.) Get the GMO FAQ’s – a perfect tool to read to get educated on GMO’s.  Look also for the Non-GMO Project (the ONLY third-party non-GMO verification program in North America) seal on foods to assure the item is verified. Click HERE to print.
2.) Click HERE to find Non GMO verified products, restaurants and retailers near you.
3.) Click HERE to download the FREE Non-GMO Shopping Guide app for iPod Touch + iPhone.
4.) Click HERE for a great Non-GMO shopping/reference guide print out.
5.) A must have!  Click HERE to get the Buycott app.  This allows you to scan foods at the store directly from your iPhone. It will look up the product, determine what brand it belongs to, and figure out what company owns that brand. It will then cross-check the product owners against the companies and brands included in the campaigns you’ve joined, to verify if product conflicts with one of your campaigns (ie: Demand GMO Labeling).

To say there are conflicts of interest between government, corporate control and people’s well-being would be a major understatement.  For example, were you aware that President Obama appointed Michael Taylor, a former VP and lobbyist for Monsanto (the widely criticized GM food multinational), as senior advisor to the commissioner at the FDA? (Taylor is the same person who, in the 1990s promoted allowing GMOs into the U.S. food supply without undergoing a single test to determine their safety or risks). Appalled?  Join the club. Use your voice to sign the petition HERE and ask Obama to cease ties with Monsanto. But, it gets worse.  Recently, the Monsanto Protection Act was passed by the Senate which protects U.S. biotech companies from litigation if their GMO seeds turn out to be dangerous. Again, you can use your voice to repeal the Monsanto Protection Act HERE.

Sip Your Way to Health With Sensational Smoothies!

Does Your Cup of Coffee Contain a Latte of Chemicals?

Is There a Place for Seitan at Your Table?

Khorasan Wheat: An Ancient Wheat Grain for the Gluten Sensitive

How Much Poison is in Your Food?

Prepare to FALL in Love with Persimmons

The Health Benefits of Cooking with Tea

3 Things You Didn’t Know About the Keto Diet

How to Pick Fresh Fruits &#038; Vegetables Every Time

6 Steps to Starting a Healthy Family Diet This Summer

Oh, Monsanto isn’t the only villain in the story.  Others include DuPont, Dow AgroSciences, Syngenta, BASF and Bayer CropScience. But, since Monsanto created Agent Orange, DDT, Saccharin, polystyrene, PCB’s, RoundUp and more– we have no problem singling them out. Really? Are these the people you trust with your food safety?

We all deserve the right to know what’s in the food we buy so that we can make informed decisions. Period. Lastly, we asked our Facebook fans to describe Monsanto using one word.  As you can see from the above graphic, they conjured up a lot of descriptive words.  When we Googled Monsanto, their company description states, ‘If there was one word to explain what Monsanto is about, it would have to be farmers.’ Hmm. You be the judge.