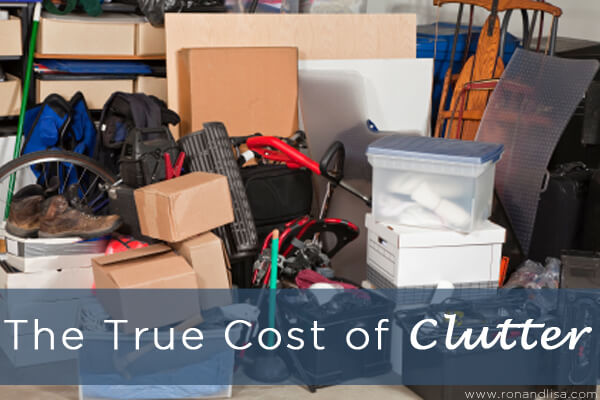 Living in a healthy home that is loaded with clutter is a bit of an oxymoron. It’s true; clutter can create health problems by allowing more dust, dirt and debris to accumulate. However, clutter represents much more than the physical, tangible stuff that fills our drawers, lines our cabinets, stuffs our garages and suffocates our closets.

Obviously, clutter has become a huge problem in today’s 21st century trendsetting, overspending and instant gratification society. Organizing experts are coming out of the woodworks.  Television shows are exposing hoarder nightmares and retail stores are emerging to fulfill our organizing fantasies with more stuff to contain all of our stuff.

But, how did we as a society get so out of control with the need for more and more things? Did you know the Great Wall of China and the Fresh Kills landfill in New Jersey are the only two manmade structures on Earth that are large enough to be seen from outer space? Wow, our clutter can even be seen from space! Or, that North America and Western Europe account for 60% of private consumption spending, but only represent a little over one-tenth of the world’s population? According to the World Watch Institute, in 2002, 61% of U.S. credit card users carried a monthly balance, averaging $12,000 at 16% interest. The finance charges on this debt alone are higher than the average per capita income of 35 countries (in purchasing power parity). What is the true cost of all of this stuff and what financial burden are we placing on ourselves, our family and our future?

It is not solely our fault. Yes, it is our responsibility to deal with this crisis and clean up our acts; but it all starts with understanding how it begins to manifest and, more importantly, forgiveness. After all, we have been brainwashed by marketing geniuses. Today, you can’t go to the movies, push a cart through the grocery store, take a flight, drive down a freeway or even ride in an elevator without being marketed to. Heck, in many establishments, you can’t even use the loo without staring at an advertisement on the back of the stall door!

In a future post, we will have guest blogger – an organizing expert – who will shed some light by presenting a step by step approach to tackling clutter; but for now we are focusing on identifying the problem at hand. If you have been living under a pile of junk and have not yet watched the Story of Stuff, then do yourself a five minute favor. This will help you begin to comprehend how this overwhelming problem emerged in the first place and empower you to just say no to more and more unwanted things.

In many cultures, sweeping away negative energy at the start of each year and decluttering are part of a societal norm. This is because the heavy energy of unwanted things holds us back and prevents us from our true potential. We all know the amazing feeling of clearing out and cleaning your car right before you sell it. Or, creating piles for nonprofits to retrieve and repurpose during a move to a new home; that light feeling of giving away what is no longer useful to you to someone else who needs it. It’s true, we can’t see the energy of clutter, but we have all felt it. Don’t wait until you sell something or move – give yourself the joyful feeling now. The art of Feng Shui and Wabi-sabi have brought awareness to our Western culture. They teach the importance of allowing Qi (ch’i) energy to move better through a space and focusing on the simplicity of a space. With a plethora of organizations that pick up your unwanted goods free of charge from your doorstep, there remains no more excuses to hang on to unused things. They don’t remove our memories; rather, they create new ones for someone else.

I leave you with a final tip regarding where to send your unwanted, unused and annoying stuff. Ebay and Craigslist are obvious choices and will provide you some extra cash (to assist those high interest credit cards used to purchase the stuff in the first place). However, another great option is to use is Freecycle. This non-profit group connects people via its online community, and allows you to give (or receive) free unwanted stuff in your own town. The concept of Freecycle spreads over 85 countries. Currently the Freecycle concept keeps over 500 tons of material a day out of landfills.