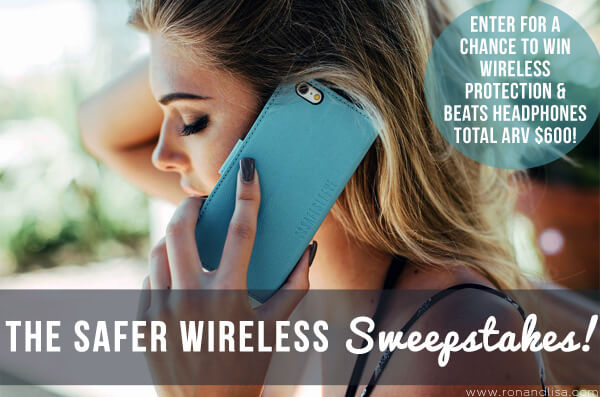 In case you’ve been living under an unprotected iPad, laptop or cell phone (hello!), you may have missed the latest breaking news from the National Toxicology Program (NTP, a division of the National Institutes of Environmental Health Sciences (NIEHS)) based on a multi-year study of mice and rats exposed to cell phone radiation. The results are in…and they ain’t pretty.

The ten year, 25-million-dollar government study, the most comprehensive assessment to date, determined the effects in rats and mice from exposure to radiofrequency (RF) radiation from cell phones. Researchers found increased rates of cancer in male rats exposed to cell phone radiation.

Important, but studies of this magnitude should have been executed previously – as in – prior to the estimated 4.93 billion mobile phone users expected to exist this year, worldwide. According to senior NIEHS toxicologist, Ronald L. Melnick, PhD, who designed the study,

But, that’s just the tip of the toxic iceberg. The study also found DNA damage in some of the exposed animal groups. In addition, exposed children were found to be the most vulnerable to cancer risk due to their skull thickness and developing brains.

And, it’s not just cancer. Devra Davis, PhD, MPH, President of Environmental Health Trust (EHT), said the health effects stretch to include brain development, according to a Yale study that ‘found mice exposed to cell phone radiation during pregnancy had poorer memory and increased hyperactivity.’ Even the Cleveland Clinic has recommended keeping cell phones away from the body due to studies revealing damaged sperm. A new study from Sweden has also found an increase of cancers in the head and neck coinciding with the increase in cell phone use.

Still don’t have your attention? Then you can refer to the 34 scientific studies that link Wi-Fi to adverse health effects. Or, you could heed the advice of The World Health Organization, who has classified RF emissions as a Group 2B carcinogen; possibly carcinogenic to humans.

Today, 95 percent of American adults use a cell phone, according to a survey. We realize technology and wireless digital devices aren’t going away, but there ARE things you CAN do right now to reduce your exposure to harmful radiation; including protecting yourself with shielding cases. Don’t choose just any case, rather shielding cases that have been tested in an FCC accredited independent lab to block up to 99% of RF radiation and over 92% of ELF (extremely low frequency) radiation emitted by electronic devices.

‘Each day our vision of a safer world for [tablet, cell phone and] laptop users continues to grow. As Electromagnetic Radiation awareness heightens, the need for SafeSleeve protection continues to grow for students, expecting moms, families, business people, or any consistent …user.’ ~The SafeSleeve Founders 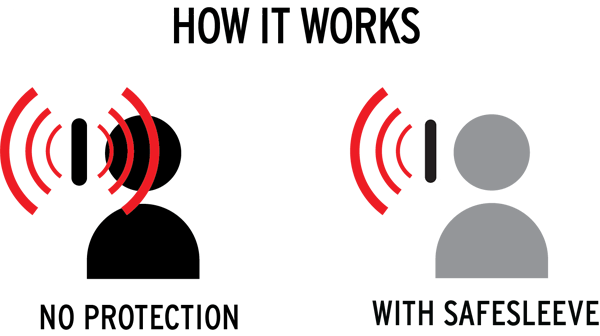 What do you get when you combine two Engineering graduates with a desire to make a difference in people’s lives by offering radiation protection that is stylish and functional? Oh, right..products that offer:

While the SafeSleeve protection cases certainly are cute, they’re not just another pretty face. SafeSleeve Offers:

Look for The Tri-Shield Logo

The three portions of the tri-shield also represent the three types of radiation the SafeSleeve cases block: 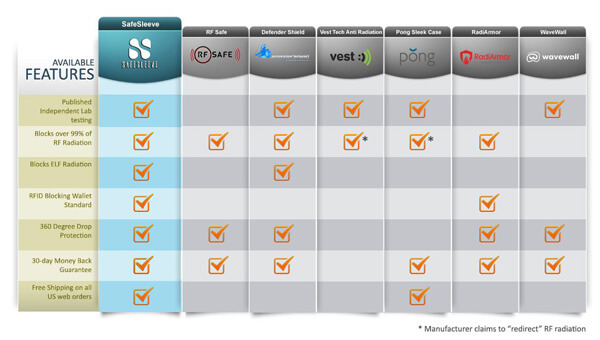 According to EHT, here are a few helpful tips and action steps you can take right away in addition to using your SafeSleeve case:

1. Do not carry cell phones in bras or tucked in clothing.
2. Do not carry cell phones in pants pockets.
3. Put wireless devices in “airplane mode” with Bluetooth off when not actively using them.
4. Use speakerphone or hollow cord headphones with cell phones.
5. Wait until you are in an area of good signal (more bars) to use the cell phone.
6. Use a corded landline phone whenever possible to minimize cell phone use.
7. Minimize exposure to wireless devices by choosing wired technology, especially for children.

One first place winner will receive a $200.00 gift card towards products at SafeSleeve, plus a pair of Beats headphones f/ iTech Deals! One second place winner will receive a $200.00 giftcard towards products at SafeSleeve. That’s a total retail value of $600.00! Open to residents of the US and Canada. Sweepstakes ends 3/16/18. Whatcha’ waiting for? Put down that (unprotected phone, tablet or laptop) and share with a friend or loved one! Enter now: