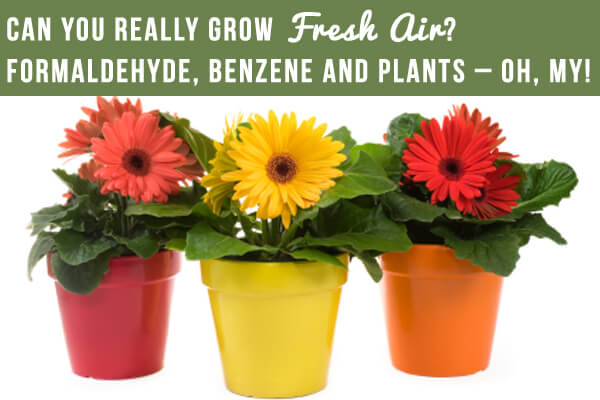 If the first part of this post, Can You Really Grow Fresh Air: Or, Should you Buy it in a Can? has your spouse in a frenzy because you have unwittingly turned your home into a greenhouse, it may be helpful to know a bit more detail on exactly what you are removing and how easy it is to create fresh air in your home.  But, what if I told you there were 3 common plants you can grow indoors to supply ALL of your oxygen needs?  Don’t believe me, watch for yourself here (it just may be a life saving 4 minute investment of your time):

For example, Philodendron, Spider Plant and the Golden Pothos were labeled the most effective in removing formaldehyde molecules. Why is it important to remove formaldehyde and benzene from your home? For starters, formaldehyde (yes, the same as in the frog experiment from your science class) is a ubiquitous chemical found in virtually all indoor environments.   Some formaldehyde sources in the home include: older carpeting, cleaners, foam insulation, furniture, paper products, plywood and particle board. The major sources which have been reported and publicized include urea-formaldehyde foam insulation (UFFI) and particle board or pressed wood products used in manufacturing of inexpensive, veneered furniture sold today. Formaldehyde is used in consumer paper products which have been treated with UF resins, including grocery bags, waxed papers, facial tissues and paper towels. Even many common cleaning agents contain formaldehyde! UF resins are used as stiffeners, wrinkle resisters, water repellents, fire retardants and adhesive binders in floor coverings, carpet backings and permanent-press clothes. Other sources of formaldehyde include heating and cooking fuels like natural gas, kerosene, and cigarette smoke.

Now that you know where it is, why do you want to avoid it?  For one, formaldehyde irritates the mucous membranes of the eyes, nose and throat (ie: that new home smell)! It is also a highly reactive chemical which combines with protein and can cause allergic contact dermatitis. The most widely reported symptoms from exposure to high levels of this chemical include irritation of the eyes and headaches. Until recently, the most serious of the diseases attributed to formaldehyde exposure was asthma. However, the Environmental Protection Agency (EPA) has recently conducted research which has caused formaldehyde to be strongly suspected of causing a rare type of throat cancer in long-term occupants of mobile homes.

And what about the next chemical, benzene? Benzene is a very commonly used solvent.  Here are some sources of benzene in your home or office: inks and dyes; petroleum products like gasoline & oils; plastics; rubber products; synthetic fibers; tobacco smoke; detergents; paints and it is also used in the manufacture of detergents, explosives, pharmaceuticals, and dyes.

Benzene has long been known to irritate the skin and eyes. Chronic exposure to even relatively low levels causes headaches, loss of appetite, drowsiness, nervousness, psychological disturbances and diseases of the blood system, including anemia and bone marrow diseases. Evidence also exists that benzene can contribute to leukemia in humans. Repeated skin contact with benzene will cause drying, inflammation, blistering and dermatitis. So, what happens if you breathe it in on a daily basis?  Acute inhalation of high levels of benzene has been reported to cause dizziness, weakness, euphoria, headache, nausea, blurred vision, respiratory diseases, tremors, irregular heartbeat, liver and kidney damage, paralysis and unconsciousness. In animal, tests inhalation of benzene led to cataract formation and diseases of the blood and lymphatic systems. Yikes!  This is starting to sound like a pharmecuetal commercial!

But speaking of medicine, the Aloe Vera plant is also known as “medicine plant.” Many people already have one in a bright kitchen window because of the soothing, healing properties on burns, bites and skin irritations (yes, that cool, green gel)! It evolved in tropical or sub-tropical forests, where they received light filtered through the branches of taller trees. Because of this, their leaf composition allows them to photosynthesize efficiently under relatively low light conditions, which is perfect in a bathroom, bedroom or office!  This in turn allows them to process gasses in the air efficiently through openings in the leaves called Stomata. If color is more your thing, you’ll be pleased to know that of the NASA plants studied, two were flowering plants; chrysanthemums and gerbera daisies.  These were rated superior in removing benzene from the chamber atmosphere.

Get ready for the next post, Part III:
Can You Really Grow Fresh Air: How Green Outside Saves Green Inside!