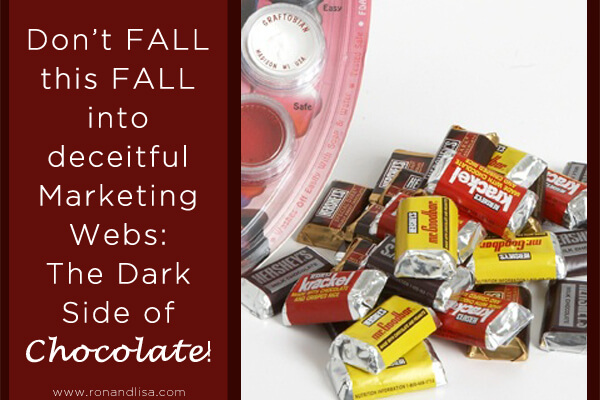 If you read our most recent post, Tips & Tricks for a Healthy HalloGreen, then you are familiar with ways to make your Halloween, and more importantly your entire holiday season, healthier for you and your family.

One such example is to support local farmers by purchasing your pumpkin from these hard working, conscious farmers who support our local communities and Mother Nature by reducing the carbon footprint associated with importing goods. Ron and I purchased our pumpkins locally. No pumpkin carving Picasso’s between the two of us, however we had a lot of fun creating them.

Of course, all of the goodies around this time of year have me thinking of, besides pumpkins, my favorite chocolate – Chocolotl by Flow Foods (Fair, Local, Organic and Wild). Deanna Moore is the founder and happens to be a local colleague of mine. I know she stands by her core values when it comes to the integrity of her Chocolates. Inspired by the ancient healing and ceremonial uses of chocolate dating back thousands of years in Mesoamerican cultures, Chocolotl’s ingredients are 100% organic and certified vegan, raw and fair trade. And my favorite part… they’re actually GOOD for you! Yummy and guilt free? Who knew? Made from Raw Cacao, some benefits include:

And, they are wrapped in 100% biodegradable packaging (which makes for great gift giving).

It seems so simple – make healthy products and hence, enjoy the treasures of these special holidays without the guilt – or high price to our health. However, I was blown away when I discovered the “Dark Side of Chocolate,” an undercover documentary that exposes the working conditions on conventional West African cocoa plantations. You can learn more and even host a neighborhood screening at your house to educate your friends and family this year. 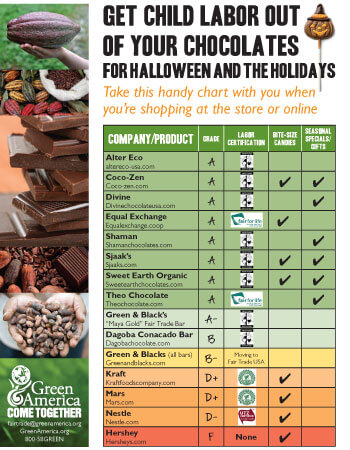 Thanks to Green America and their expose on the issues of child labor in our cocoa supply chain we are pleased to be able to bring this very important information to your attention. You do have power to make changes… through your purchases. Don’t underestimate this because every purchase counts and knowledge is power! Thank you to Green America for also creating this handy chocolate scorecard that you can print out and carry in your wallet or purse to the store to assist you in your purchases.

I was shocked to find Hershey’s and Nestle at the bottom of the heap! Hershey receiving the lowest score – an F and Nestle with a D-. You can view the entire Hershey report in more detail here.

Keep Child Slavery Out of the Cocoa Supply Chain

Sorry to scare you, but on Halloween, much of the chocolate Americans will hand out to trick-or-treaters will be tainted by the labor of enslaved children.

Hershey’s, Nestlé, and the other big chocolate companies know this. They promised nearly a decade ago to set up a system to certify that no producers in their supply chains use child labor. They gave themselves a July 2005 deadline for that, which came and went without meaningful action. A second voluntary deadline sailed by as well in 2008. There’s a new deadline for voluntary action at the end of this year. Don’t hold your breath.
Few Americans had heard of this problem before reporters Sudarsan Raghavan and Sumana Chatterjee exposed the scandalous conditions under which most U.S. chocolate is made, in the summer of 2001.

In one of their articles, a slave described his 13-hour work-days on the 494-acre plantation as brutal, filled with harsh physical labor, punctuated by beatings, and ending with a night of fitful sleep on a wooden plank in a locked room with other slaves.

“The beatings were a part of my life,” said the boy, who was sold into slavery at not yet 12 years old. “Anytime they loaded you with bags and you fell while you were carrying them, nobody helped you. Instead, they beat you and beat you until you picked it up again.”

The reports shocked some members of Congress into action. That fall, Rep. Eliot Engel (D-NY) and Senator Tom Harkin (D-IA) prepared bills to require U.S. chocolate companies—by force of law—to certify their products as slave-free. Engel’s bill passed the House, but before Harkin’s bill could pass the Senate, the chocolate industry had announced a voluntary four-year plan to clean up its own supply chains, without legislation.

Meanwhile, evidence that child slavery still bedevils the chocolate industry isn’t hard to find. For example, in late September, a research team from Tulane University (specifically charged by Congress with oversight of the voluntary supply-chain efforts) reported that “the industry is still far from achieving its target by the end of 2010 … and the majority of children exposed to the worst forms of child labor remain unreached.”

The just-released documentary The Dark Side of Chocolate, by filmmakers Miki Mistrati and U. Roberto Romano takes a less detached tone, going undercover and exposing child slavery in the cocoa supply chain from the inside.

And if that’s not enough, the State Department’s own 2010 Trafficking in Persons report lists several West African countries where children are traded and taken to work cocoa plantations.

All the while, the biggest chocolate companies cavil that because they don’t own the cocoa plantations outright, cleaning up their supply chains is too hard. But some of them aren’t even trying. The biggest cocoa company in the country, Hershey’s—even after nine years to get started—has no certification system in place whatsoever to ensure that its cocoa isn’t tainted by labor rights abuses.

Here are three things you do this Halloween to ensure that your chocolate isn’t tainted by the exploitation of children overseas.

The people who produce the raw materials for our chocolate treats deserve fair wages and safe working conditions. African children shouldn’t have to suffer unspeakable horrors so that our children can have a happy Halloween.

“I did then what I knew how to do. Now that I know better, I do better.”
—Maya Angelou